The Nordic Group and Holmøy Holding AS join forces to build a new apartment hotel in the middle of Narvikfjellet!

Facts about the new hotel:

The northern Norwegian business groups Nordic and Holmøy are building a modern and highly demanded apartment hotel in the middle of Narvikfjellet Ski Resort.

- We strongly believe in what is now happening in Narvik, will contribute to growth for the destination and provide new opportunities for cooperation with larger tourism operators who want to send guests to Narvik. We must collaborate more to release the potential we have in the entire region, says Sverre Utvåg, owner and manager of The Nordic Group.
The apartment hotel will be run by Narvikfjellet AS, which also have unique holiday cabins in its portfolio.

Now, together with Narvikfjellet and its owner Forte Narvik, they have planned and designed an apartment hotel, with self-catering. Just opposite the lower cable car station, on the site where the old "Skistua" was located. This summer, water and sewage systems are being built in the area. Construction of the hotel will start in the spring. The hotel will have approx. 60 apartments, divided into two sizes, one- and three-room.

The apartment hotel will be 50/50 owned by The Nordic Group and The Holmøy Group. The companies invest more than 100 million NOK - and lease the hotel building on to Narvikfjellet AS.

- We have a long-term perspective on our tourism investment. This hotel will complement the offer in Narvik both summer and winter, and is therefore commercially interesting, says Sverre Utvåg.
Sverre Utvåg has been in the industry for 35 years, from when he started in the company which was owned by his own family. For a long time, Nordic was only in Harstad and Tromsø. This winter they opened a cultural center hotel in Sortland.

- For us, it is an important milestone when, after our entry into Sortland, we also invest in Narvik. We want to see the region as one, not least in terms of tourism and experiences. We are small investors on our own, who can achieve significantly more strength and attraction together, says Utvåg.

Knut Holmøy heads the family company Holmøy Gruppen, which is a significant, Northern Norwegian-owned fishing group based in Sortland. The group had a total turnover of 1.8 billion in 2020.

- For us at the Holmøy Group, the investment in Narvik is an important in an exciting region with ambitions. The good cooperation with Nordic at Sortland has given us extra flavor. We want to become a visible player in the region beyond our core business, says Knut Holmøy. After building up on farming and whitefish, we now want to look at other business areas. In real estate, we see exciting opportunities ahead, says Holmøy.

-  Infrastructure and expertise are being built, and it is also important to us that the municipality has strategically prioritized tourism. At the same time, tourism is being developed in Harstad and Troms. We have for a long time maintained contact and dialogue with Narvik, and believe that even more cooperation, expertise and investments will be an advantage for everyone. It's about making the "cake" bigger. After the pandemic, local tourism or regional tourism industry will recover. Traveling is coming back. What we can present here in the north is attractive to many different segments of the market, says the investor.

The apartment hotel's design and expression is the work of architect Snorre Stinessen from Tromsø. It has been further developed by LPO Arkitekter.

- We want to be part of what happens in the future in this area, says Sverre Utvåg.

For Narvikfjellet AS, this will mean that within a year and a half there will be three types of accommodation close to the facility; apartment hotels, rental cabins and cabins owned by others.

- This is an important step in the development of tourism in Narvik and the region. That solid and competent northern Norwegian companys av Holmøy and Nordic see opportunities here, and at the same time perceives the region as one unit, is gratifying, says Eirik Frantzen, chairman of Narvikfjellet and principal owner of Forte Narvik.

When will the hotel be finished?
We look forward to welcoming the first guests January 2024

How many apartments will the hotel have?
54 self-catering apartments

Should all the apartments be the same size?
The 54 apartments will be divided into three different sizes, one- two- and three-room. Suitable for families, couples and groups of friends.

Where will the hotel be located?
The hotel will be located in the middle of the ski resort, right next to the lower cabble car station and the resort's parking area. 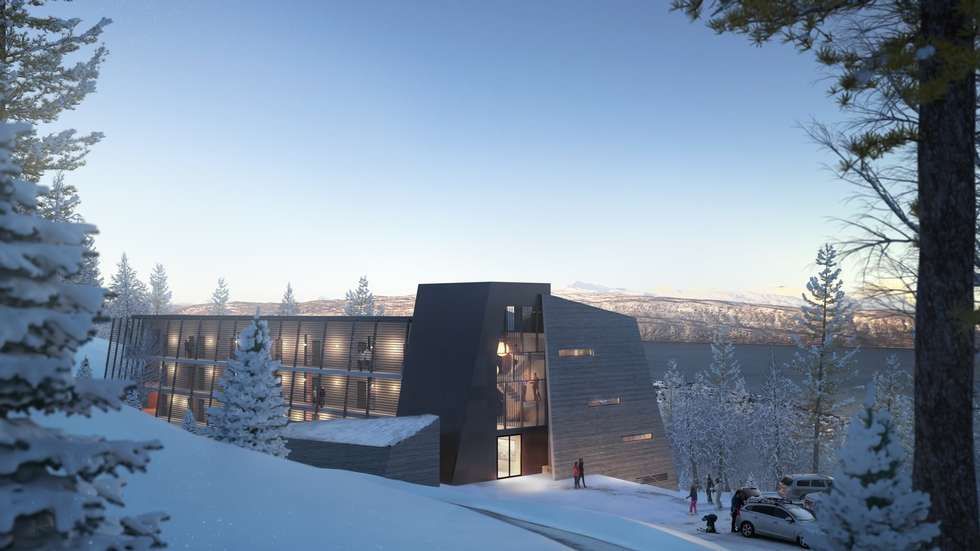