In Narvik you can see the magical Northern Lights waving across the sky. It is close to an ethereal experience watching it, while it dances and flames playfully on the Arctic sky.

The Norwegian Vikings named the bridge between the Earth and the home of the Vikings Gods "Bifrost". Most likely this bridge is what we refer to as the Northern Lights today, and with this in mind, "Heidal" was the God of the Northern Light in Norse Mythology.

Until the late 1900's, white garments such as hats and scarfs, should not be used in the winter. It was believed that waving these against the Northern Lights would make them so angry they would come and get you.

Facts about the Northern Lights

Northern Lights are phenomena that occur when electrically charged particles are hurled to Earth from the sun. When the solar winds are more powerful than normal, the particles (electrons and protons) will collide with gas atoms in the Earth's atmosphere, exciting these atoms. The atoms then release energy in the form of electromagnetic radiation, and this can be observed as a belt around the magnetic poles.

The Latin name for the Northern Lights is Aurora Borealis.

When is the best time to see the Northern Lights

Due to its location, Narvik is among the best places for observing the Northern Lights.

Between the autumn equinox on 21th September and vernal Equinox on 21th March, the Northern Lights appear. The time to see them is in the evening, between 18.00 and 01.00 in the night.

We cannot guarantee that you will get to see the Northern Lights, but hunting them is exiting in itself. We can have days and weeks when the lights occur in the sky, dancing in their magnificent colors. Then, the day after, we get a blizzard or overcast skies with no chances to see these beautiful phenomena. Hence, the more time you spend in Narvik, the greater the chance to experience them!

Throughout the entire Winter, we offer excursions in a magical landscape, just perfect for hunting the Northern Lights. 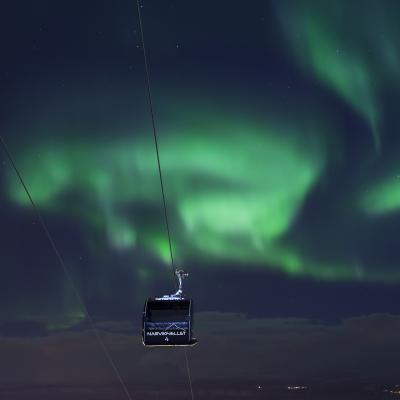 Lights at the Lodge